I have been surrounded by Standard Poodles since the age of six in 1961, when my Mother acquired her first, a lovely black, from Joan Byam at By-Jo Poodles. Mom got bit by the Poodle bug and began breeding her own, under the Kennel name “Cherod”.

Over the years our household had many Champions, including Cherod’s Rebel Jester, Bibelot’s Samantha Bewitched, Hi Crown’s Wayward Girl, Cherod’s That’s My Number, Wentworth Andrew, and Bibelot’s Tabatha of Cherod. Tabatha won the Puppy Sweepstakes at the Poodle Specialty at under a year of age in 1969. And Samantha won the Brood Bitch Class at the William Penn Futurity in 1968 over all three sizes.

I began showing dogs in Junior Showmanship at the age of eight, winning many titles and appearing on the Children’s Show, “Uncle Bobby” three times to strut my stuff.

As I grew up, I soon realized that regardless of the trials in my life, my dogs were my best friends. They loved me no matter what phase I was going through. I could never understand how someone could live in a house without a dog to play with, cuddle on the couch with, confide their deepest secrets to, (they never tell on you-honest!) and to mourn with when they faced losses.

Over the years Mom’s preference went from black to silver, and mine has evolved to red and apricot. We have a lovely girl – Arreau’s I’ll Follow The Sun CGN (Betty-Jo) who has been fully health tested with wonderful results for hips (Excellent), patellas, heart, eyes, thyroid, SA., dentition and DM., and is clear by parentage of vWd and NE. Her colour is beautiful, she is healthy and her temperament is solid and gentle. Betty-Jo has graduated from Advanced Obedience classes and has earned her CGN and she is a Certified Therapy Dog with TPOC. Her full sister Lucy in Bismarck, North Dakota, has earned her CGC (the American equivalent of the CGN) and has her “Rally Novice”, “Rally Advanced” and “Rally Excellent” titles. She is now officially known as Arreau’s Rock With You CGC, RN., RA., RE. Pretty impressive! Their full brother Murphy (Arreau’s Morning Has Broken), who lives in Germany, is being trained as a Red Cross K9 Unit Search and Rescue dog. On October 16th, 2011, Murphy became  “Federal Youth Winner 2011” in Dortmund Germany, winning over dogs of all breeds. On October 23rd, 2011  Murphy became  a German Youth Champion VHD and a Youth Champion DPK! We are beyond thrilled! All of this is a testament to the stability of their dispositions and conformation.

Our boy CH. Winnow Happy Go Lucky at Arreau CGN (Quincy) from Iceland, became a Canadian Champion in August 2011! He earned his CGN (Canine Good Neighbour) certificate in February 2012. His testing is complete with wonderful results for hips (Excellent), elbows, eyes, heart, SA., thyroid, dentition and patellas, and he is clear by parentage on vWd., NE and DM. He has never met a stranger and has a rock solid temperament. He is affectionate and kind, sweet and the joy of this breeder’s heart. I cannot say enough about this boy’s incredible disposition.

CH.Farfallina at Arreau Very-Merry (Journey) our first Czech import, became a champion in five weekends out. Journey finished her championship with two Best of Breed, 5 Best Puppy in Breed, 3 Best of Winners and 2 Best Opposite Sex, one of them over the top black bitch in North America. She is an amazingly gorgeous girl with a beautiful temperament. She will be pursuing her CGN and may have some other exciting things on the horizon. She loves people and other dogs and radiates warmth and love. Her testing is complete and she has OFA Excellent hips, normal elbows, is OFA clear of vWd, NE and DM., and eyes, thyroid, dentition, elbows and patellas are are done and normal.

Arreau’s I Did It My Way CGN (Cayenne), is a lovely red girl with gorgeous pitch black points. She earned her CGN in 2013 and is going to become a Certified Therapy Dog. She is intelligent, sweet and wonderful with people of all ages and loves other dogs. Her testing is complete and her results have been great. Hips, elbows, eyes, cardiac, patellas, S/A, thyroid, vWd, NE, DM and dentition have all been cleared.

Am. CH.Graphite at Arreau Very-Merry(Jameson) is our magnificent black that we imported from the Czech Republic. This boy has blown our minds! He finished his American championship at 10 1/2 months old, in five weekends out, with four majors. He acquired his American Grand Championship in just eight shows, with six majors, six champion defeats, two Best of Breed and a Best Opposite Sex. He acquired his Canadian championship in six shows over two weekends, with two Best of Winners, a Winners Dog, a Group 1st, Group 2nd and Group 3rd. So impressive! His health testing is now complete with wonderful results and he is now available at stud to approved and tested girls. We are very, very excited about this boy’s future.

Puppies are registered with the Canadian Kennel Club. Wonderful dispositions and great health will always be our top priorities. Our puppies are raised and socialized in our home. They experience young and old humans, other pets, vacuum cleaners, indoors, outdoors and most important- LOVE abundant!

We love our dogs (and we cover their ears if we say that out  loud because they are SURE they are people!) and hope you will too.

Our puppies leave us with their tails docked and dew claws removed, micro-chip inserted, de-wormed, CKC registered, vet physical, first shot, a blanket with the scent of Mommy and litter mates, collar and leash, DVD of your puppy’s first eight weeks with us, and a puppy starter kit. The puppy kit includes samples of food, a file system to keep all of your pup’s records and documents, as well as other items to get them started off right in their new homes.

Deposit policy: We require a $400 deposit to hold a puppy for anyone, and the pups are held in the order the deposits are received on each litter. Deposits are non-refundable unless they are on a litter where the prospective mother has not yet been health tested and does not, for whatever reason, pass her health clearances and cannot be bred. In the event we do not have a puppy for you in a specific litter, your deposit will be held in trust for the next litter anticipated out of that mother, or we can discuss a puppy from another mother. 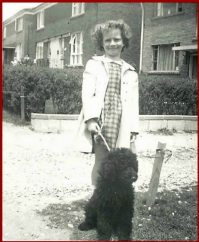